The cyber hackers and phone scammers are here 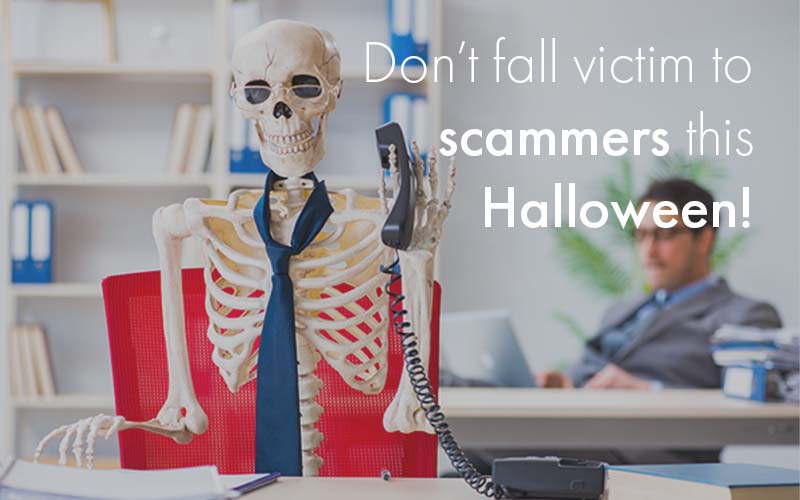 It’s Halloween, and everyone’s entitled to at least one good scare. But Halloween came early for Tesco when its website and app was compromised by a malicious attack last weekend.

Attacks like this are becoming increasingly frequent and are not restricted to large businesses or online hacks alone. Ofcom research reveals that last summer, almost 45 million people received at least one suspicious call or text.

Invasion of the scammers and hackers

These malicious attacks are usually hidden within a reasonable request such as a parcel delivery confirmation; they look and feel like the real thing, just like the aliens from The Invasion of the Body Snatchers!

Scammers will attempt to compromise your email, banking or social media accounts if you reveal your credentials or personal data.

These attacks are becoming more and common and harder to identify – UK Finance reported as much as £754 million was stolen by fraud – now that’s scary!

Who falls victim to scam calls and texts?

The two parties who are targeted the most are in the 16–34 age group, (most frequently by text) and landline users aged 75 and above.  In fact, as many as 82% of us have experienced a scam attempt in some form within the last three months.

What should you do if you receive a suspicious call or text?

To help prevent other people from falling victim to these awful scammers, you must report every call or text accordingly. If you receive a suspicious call, please flag it up to Action Fraud UK and forward any texts to 7726.

Ways to avoid an attack

You can be scammed at work as well as at home, most commonly by phishing emails. These try to trick you into revealing your login details to secure systems, and it only takes one account to be breached for a cybercriminal to compromise the entire business.

Nightmare of a cybersecurity breach

The best defence for protecting businesses assets such as customer data is awareness training.  Highlighting potential risks to employees makes them more likely to recognise, flag and escalate any anomalies they find. This results in more engaged employees, both with security, data governance and fraud issues throughout the wider business.

Here’s what our Finance Manager had to say about our approach to teaching cyber security: “A business is nine times more likely to be affected by cybercrime than burglary.  For us, this is a major business risk that we need to mitigate, which is why we require a well-informed Finance Team. Members of the team are kept up to date on the latest trends and tactics exploited by cybercriminals. We also promote open communication, so if anyone comes across something which isn’t quite right, they are not scared to ask for advice.”

“Be afraid… be very afraid”

Ensure your colleagues understand the possible severity of a cyberattack and the importance of strong security, by including cybersecurity awareness as a core part of ongoing training.

Talk to one of the experts at easyNetworks, we’ll help keep your hybrid office running safely and smoothly with secure remote working products and reliable IT support… so you can sleep soundly at night.

But stay alert to scammers: stop, don’t click/hang up and report!