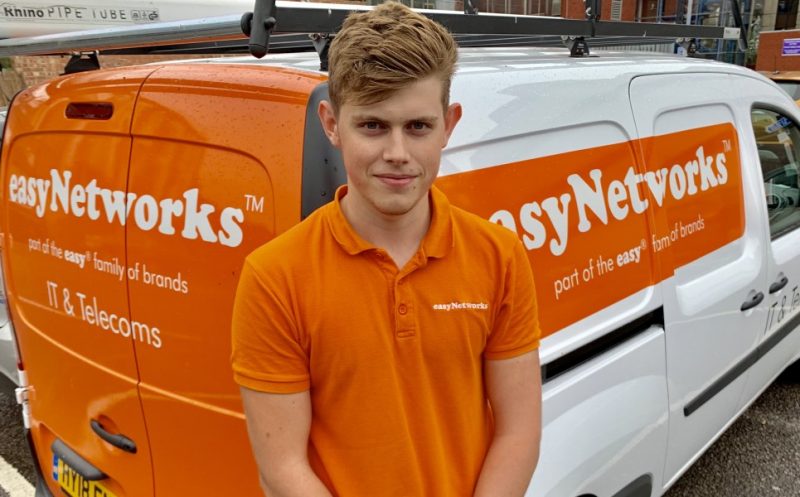 A 19-year-old trainee has impressed bosses at Portsmouth IT & Telecoms firm during his training so much that he has been promoted to a Project Engineer on his year’s anniversary with the company.

Harry Innes started working for easyNetworks, located on the Central Point industrial estate off the Eastern Road, in June last year after finishing his studies in sport at Barton Peveril College.

‘I really enjoyed my studies, but wanted to start something different for my career,’ he explains. ‘easyNetworks was suggested to me by my stepdad who knew the company were looking for a Junior Engineer, so I applied, went for interview and won the opportunity.’

After a year learning and working on network installation projects alongside experienced senior members of the team, Harry proved his abilities and has now been asked to join easyNetworks as a Project Engineer.

‘I was really pleased when I was told the news. The thing I enjoy most about the job is travelling to different places, working in so many different organisations and meeting a variety of people. The work I do for easyNetworks involved the same teamwork and logical thinking that I use in sport.’

‘Harry has surpassed expectation and received great feedback from both the members of the team he has worked with and the customers he has met, so we are delighted to offer this promotion, where he will be running projects of his own and will get his own trainee,’ says Ria White, Operations Director at easyNetworks.

‘Providing training and apprenticeship opportunities has always been very important to us over the past 20 years and we hope to welcome many more to follow in Harry’s footsteps.’